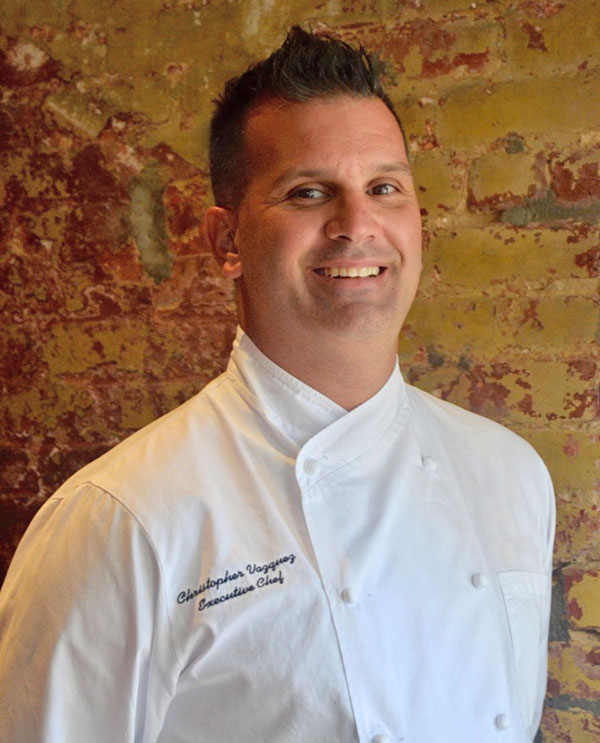 A Big Fish in a Big Kitchen

In a city renowned for seafood, on a street synonymous with festivity, there’s a landmark restaurant where you can dress up or dress down, and eat a refined fish dinner or slurp down shellfish best eaten with your fingers, prepared by a team who knows crustaceans every which way. At Red Fish Grill on Bourbon Street in New Orleans, Chef Chris Vazquez has just been appointed the new toque in the kitchen famous for barbeque oysters, hickory-grilled fish, alligator sausage gumbo, and whatever else the freshest bounty of the season inspires.

For as long as Vazquez can remember, food has been central to his life, with seafood as the constant. Born into an Italian-Cuban family in Boston, he fondly recalls hours in the kitchen with his great grandmother, who excelled at making a savory herbed acqua pazza, the Italian answer to bouillabaisse. Summer weekends, his family would camp on Cape Cod, where they’d feast on fried clams and lobster rolls at Kelly’s restaurant; the family had a direct line to fresh lobster through his great uncle, who owned a lobster fishery up the coast in Portsmouth, New Hampshire. They moved to New Orleans when he was twelve, and after graduating from high school, Vazquez turned his passion into a career by enrolling in the culinary program in New Orleans.

Vazquez jumped at the chance to work as a line cook with Wolfgang Puck on the west coast. He spent the next decade of his career on the select team of that celebrated chef, fine-tuning and elevating his culinary and management skills. For eight years, he catered the Academy Awards. He helped to launch Spago, Beverly Hills, a fine dining restaurant with a consciously relaxed vibe like that of Red Fish Grill. A year at Granita in Malibu gave him a dive-in-the-deep-end experience with Pacific coast seafood.

The siren call of New Orleans eventually lured Vazquez home to his roots, and back to the professional kitchen. He found Red Fish Grill, known for its innovative spin on Gulf seafood, to be the perfect fit. As executive sous chef, Vazquez oversaw a staff of more than 30 cooks in the bustling restaurant, taking special pride in developing his staff and serving as a coach and mentor. Then, five years in, he was tapped to preside over Ralph Brennan Catering & Events, one of New Orleans' most in-demand catering operations.

Now the team has lured Vazquez back to Red Fish Grill as executive chef for his versatile palate that will add to the beloved hometown favorites as well as his own creations informed by extensive experience on multiple U.S. coasts and abroad. For his opening menu, he’s developed a pan-seared Louisiana Shrimp with Mascarpone Grits, Blistered Tomatoes, Chili Flakes, and Basil; and a Seared Snapper, blackened with his own spice blend, with Summer Succotash of Edamame and Crawfish, and Micro-Sorrel in a light Garlic Nage. Be warned: it’s going to take more than one meal here to fully appreciate what Vazquez brings to the table!

Fun Fact: His first cooking job was at Mr. B’s Bistro, where he worked with Ralph Brennan.