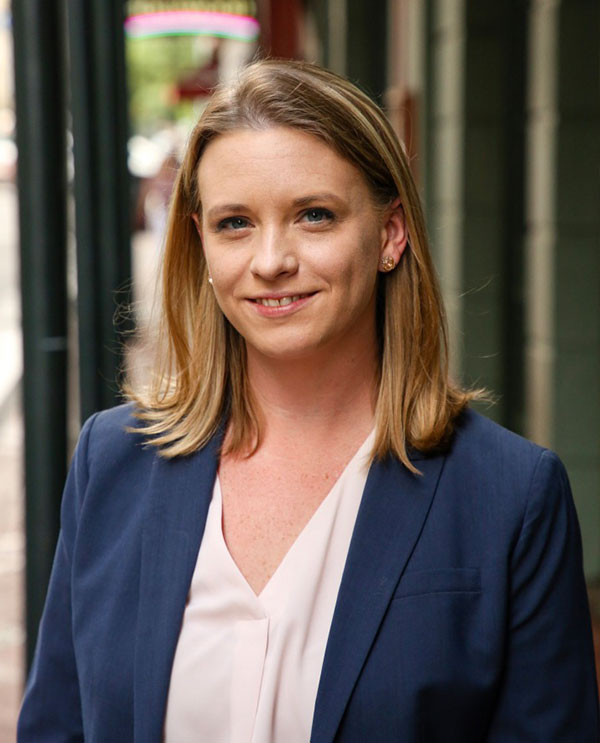 Kiley Laemmli, a native of Kansas City, grew up in a family that favored a meat-and-potato diet. Now, helping to keep the dining room humming at New Orleans' landmark casual seafood destination, she's in her element as a confirmed lover of fresh Gulf finfish and shellfish – especially as prepared by Chef Austin Kirzner and his team.

Though Laemmli began waiting tables in high school, it was when she arrived in New Orleans to attend Tulane, that she really started learning about food. She went on to hold managerial positions at the illustrious Rib Room at the Omni Royal Orleans Hotel, and then helped to open Kenton's, a whiskey-centric Uptown restaurant, eventually becoming General Manager before embracing the seafood focus and lively French Quarter vibe of Red Fish Grill.

"It's such a fun environment," she says. "And though we're a hot-spot for tourists, we're still able to provide a super-superior product – which is the reason we also have plenty of local regulars. They know their seafood, and they can tell that Chef really cares. His purveyors bring in fish that couldn't be any fresher, and local veggies come right off the truck from nearby farms." As a non-native, herself, Laemmli loves walking newcomers through the menu, and supporting many through their first oyster encounter. "I hadn't eaten one, myself, until I moved here, and now I can't get enough," she admits. "Our BBQ oysters are flash-fried, and perfectly seasoned, so that's a good place to start. A cocktail or two can also help to take down that initial 'oyster fear'..." she adds, with a laugh.

Food and drink aside, Laemmli appreciates being part of a team that takes such good care of its own. "Healthcare and benefits for all hourly staff is not even close to being industry-standard, but that's the level of investment that the Ralph Brennan Restaurant Group makes in its people," she says. She is currently taking advantage of the ongoing wine service certification process that the group offers through the Court of Master Sommeliers. "It all translates into high morale and better service for our guests," she says, "which is what hospitality is really all about."